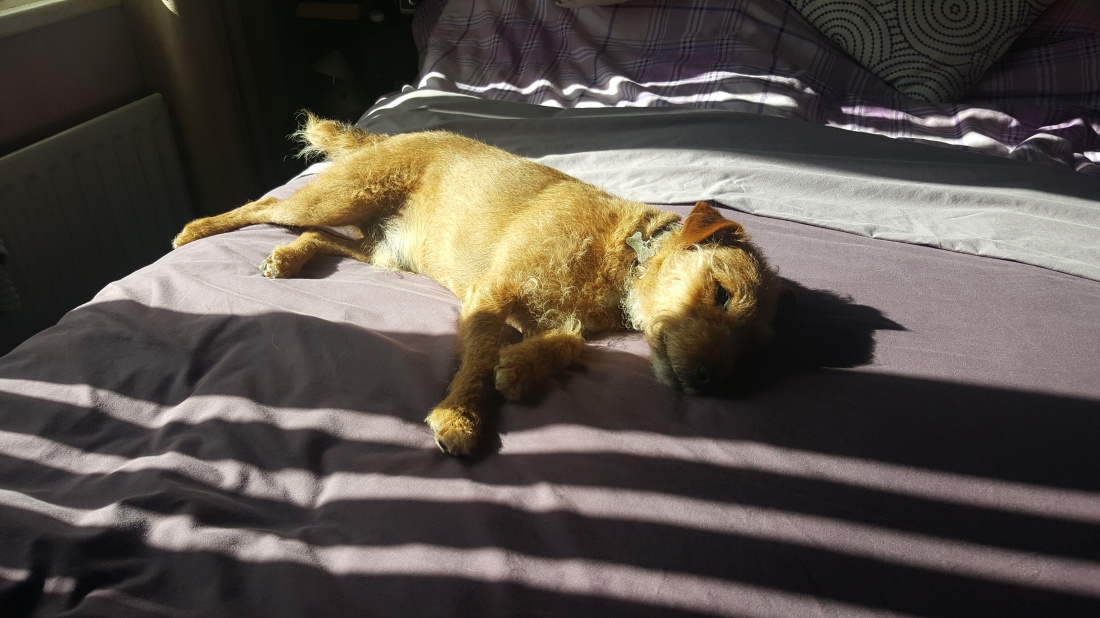 We first met on a blind date. I had talked Eileen into bringing a dog into our home, a few years after our previous pooch had died. We had heard about a West Highland that had been rescued by a local vet, and arranged to call up to see it. We were hugely disappointed that upon arrival, one of the vet’s assistants had taken a shine to the Westie, and decided to give it a permanent home.

Just as we turned on our heels, the vet mentioned that another stray had just been handed in. He brought out a thin, shivering, light brown bundle. It promptly sat down at me feet, our eyes met, and in that instant we knew he was coming home with us.

He was about six months old. He was already house trained, and sat on command. He had obviously been someone’s pet, but for some reason ended up roaming the streets until rescued.

The first year with him was a real challenge. He was nervous (bordering on anxious), and this manifested in him being impossible to introduce to other dogs. He would go completely ballistic. So much so, that I had to take him for his daily walk very late at night in the hope we didn’t bump into another dog.

A stroke of luck

The turning point was a strange one. When I was off work recuperating from my mini-stroke, the walks with Maxx were a key part of me getting out of the house and getting some light exercise. I was able to spend more time with him, making small strides in calming him down. No magic bullet, just hours and hours of patience.

I won’t go so far as saying he’s one of the family. I know he’s not, but he’s definitely part of the household. He has his own special places in the house where he can doze through the day and sleep at night. He also has some jobs to do. They are relatively easy, but really important. He’s the excuse I need to get out for a walk, he calms me just by asking to be stroked, he guards our home from any marauding cats, and he makes me laugh as he skids, cartoon-like, on the wooden floor when chasing after his ball.

At the same time, owning him carries with it a fair amount of responsibility. He needs fed and watered, his poop is quickly scooped, we can’t be away from the house for too long during the day, and he goes into kennels anytime there is a risk of fireworks (they leave him exhausted) or we go on holiday.

Anyone considering owning a dog, or any other pet, needs to think it through properly. It’s not all fluffy tails. It’s hard work. Invest your time and it can be extremely rewarding, but if you’re not prepared to put sufficient effort into caring for a pet, don’t get one. It’s not fair on you or the critter.

The same goes for people you encounter.

Not quite a dog’s life

Particularly through work, I have come across people who for one reason or another, have had a setback. I might not know their backstory, so tended to take them as I saw them. I felt it was my responsibility to get the most out of them.

I have a few instances when I was a Careers Adviser where, on the face of it, the student I was talking to seemed bereft of ideas or aspiration. Often, their attitude was a reflection of their environment: lack of support at home, drifting through education, always told what they couldn’t do.

Occasionally as a manager, I would find myself working alongside a new colleague who I could see was happy just to be staying afloat, treading water, content to simply get through each day.

I don’t mean that you should treat people like you would a dog, but some principles do transfer across.

If you want to get the best out of people you need to need to create a positive, supportive environment. Find out what motivates them and create a reward system based on that, set tasks that stretch them, be prepared to see them fail provided they learn from it, build a relationship based on trust. For those you want to help, they need to believe in themselves but need to believe in you too.

And it’s never too late to teach an old dog new tricks!

“Even an animal, if you show genuine affection, gradually trust develops… If you always showing bad face and beating, how can you develop friendship?” Dalai Lama

One thought on “The Maxx Factor”